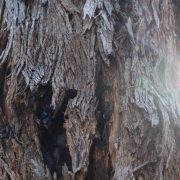 Grey Box (Eucalyptus microcarpa) is a woodland tree that grows in south-eastern Australia, mainly on the lower inland slopes and plains of the Great Dividing Range.

Its main distribution is in northern Victoria and southern New South Wales. There are two isolated populations in South Australia: in the Mount Lofty Ranges and southern Flinders Ranges. In Adelaide, the suburbs of Forestville, Black Forest and Blackwood derive their names from Grey Box.

The tree has distinctive ‘box’ bark: dense, grey and superficially crumbly but tightly held in rectangular tesselations. On older trees the bark becomes dark with larger fragments, like this photo from Reynella. 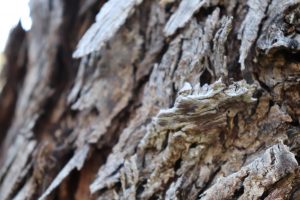 Grey Box grows up to 20 m, mostly with a single trunk. Woodlands occur mainly where rainfall is between 400 and 700 mm. It is occasionally found the floodplain of the River Murray, notably in Gunbower Forest and Koondrook Forest near Torrumbarry, and in pockets as far downstream as Robinvale. The understorey comprises shrubs and grasses.

Grey Box can occur with Black Box (Eucalyptus largiflorens). The bark of the two trees looks similar, but on the upper branches of Grey Box becomes smooth, coppery and ribbony, but remains grey and tesselated on Black Box.

Grey Box Grassy Woodland is an Endangered Ecological Community under the EPBC Act. It frequently occurs on deep, well-drained loams that are ideal for agriculture that have been preferentially cleared. About 85% of the community has been cleared since settlement.