The River Murray channel becomes substantially smaller as it flows downstream of Echuca towards Swan Hill.

The reason is that the Central Murray is an anastomosing system where flow is shared between a number of interconnected, adjacent channels. The three principal channels in this region are the River Murray, the Edward River and Wakool River.

The anastomosing system was initiated by the uplift of the Cadell Fault between 65,000 and 45,000 years ago. The fault obstructed the original westward path of the Murray at Mathoura, forcing water to flow either north or south. The original river channel, now raised 12 m on the uplifted fault block, was stranded and dried out. It remains visible today as a palaeo-channel known as Green Gully. 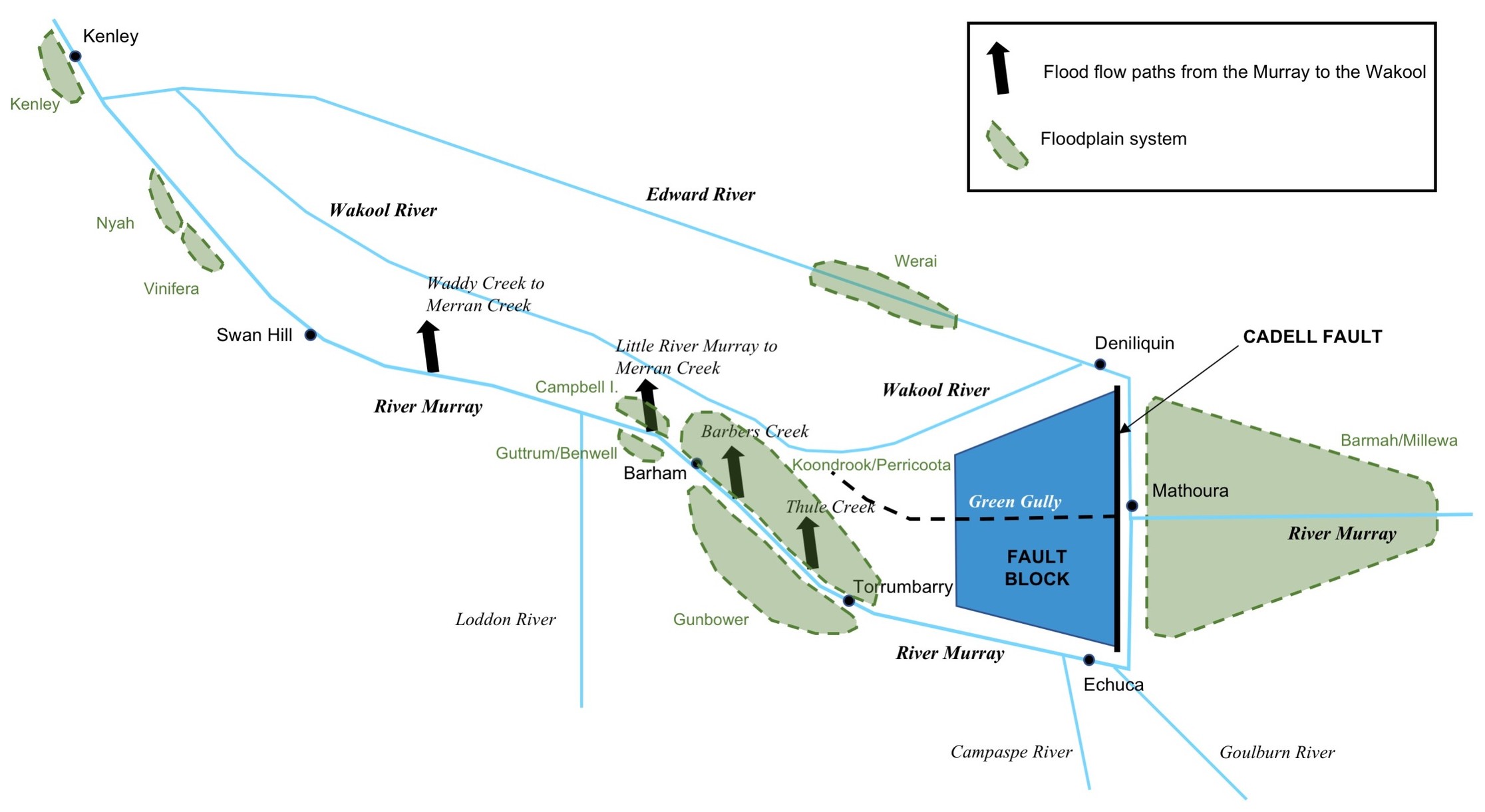 The River Murray follows the southern path along the foot of the scarp, turning west at Echuca where it is joined by the Goulburn and Campaspe Rivers. The Edward River diverges from the Murray at Mathoura and follows the northern path, reaching the end of the scarp at Deniliquin and resuming a north-westerly course. At this point the Edward and Murray are separated by 55 km with the elevated fault block in between.

The Cadell Fault Block tilts to the west. As the rivers continue downstream, the fault block recedes and Green Gully again becomes the lowest point in the landscape. Wakool River, which branches off the Edward River, adopts the flow path of Green Gully north of Koondrook Forest. 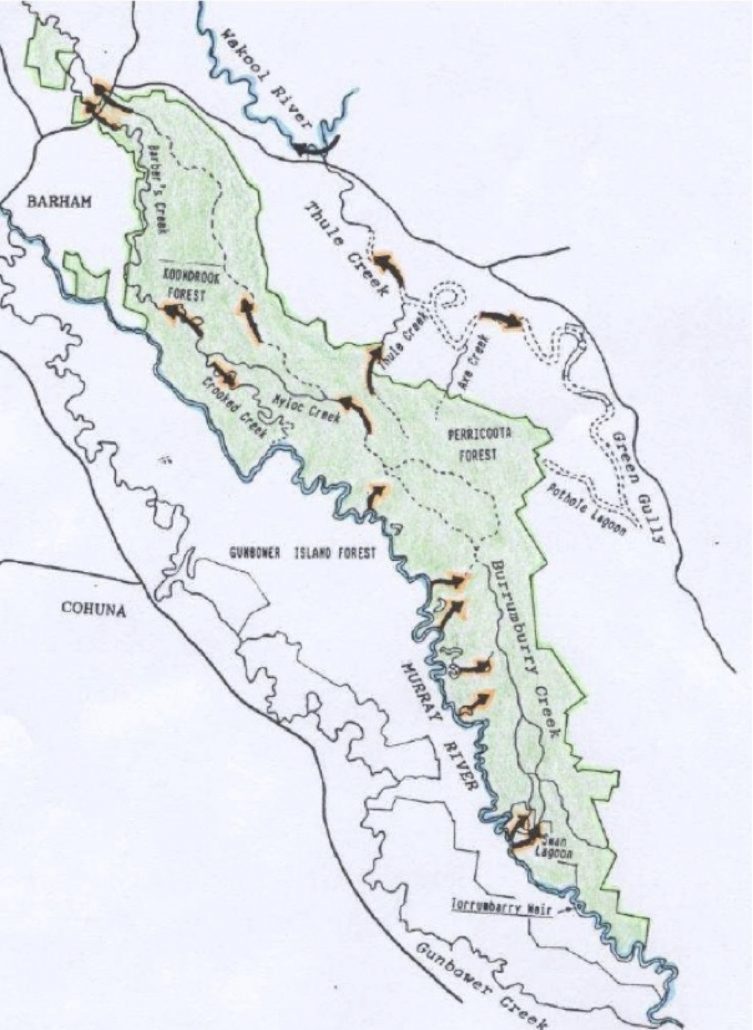 This is significant for the Murray because there is a tendency for the river to resume its former course in the lower-lying country to the north. Breakaway channels divert a proportion of high flows away from the River Murray and towards Wakool River including:

These losses result in a substantial reduction in channel capacity in the River Murray between Echuca and Swan Hill. Substantial floodplain inundation is created by sustained flows over 30,000 ML/d at Gunbower Forest but only 17,500 ML/d at Vinifera.

The anastomosing section of the river concludes where the Edward and Wakool rivers converge and then rejoin the River Murray at Kenley. The capacity of the river at this point increases again to 30,000 ML/d.

The contrast between the floodplain systems at Gunbower-Koondrook-Perricoota and Nyah-Vinifera is striking. The downstream sites are miniaturised versions of the upstream systems with a smaller river channel and narrower floodplain. The ecological characteristics are similar with Red Gum forest in low-lying areas and Black Box woodlands at the floodplain periphery.

It is important to use appropriate local hydraulic reference points when interpreting flooding regimes at any point on the River Murray. 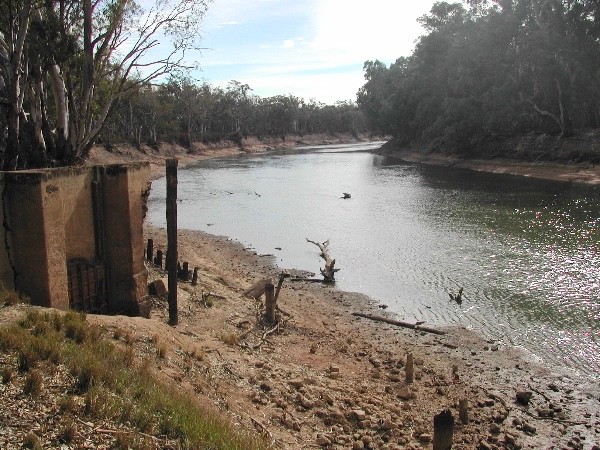 The River Murray near Deep Creek (Gunbower Forest). The channel is approximately 80 wide at this point. 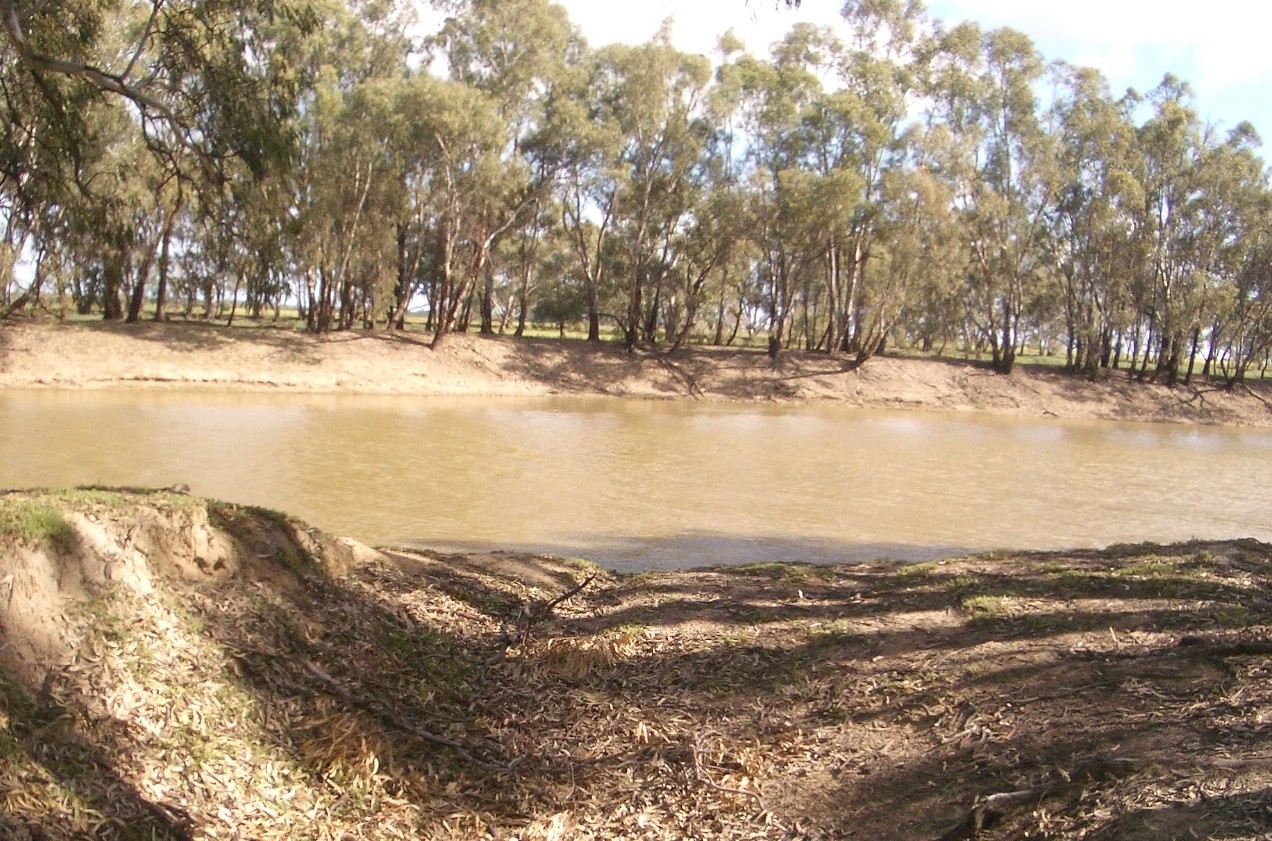 The River Murray at Vinifera Forest. The channel is approximately 50 m wide.

Mallee Dunefields of the Murray-Darling Basin
Scroll to top